Lobbying for the Poor 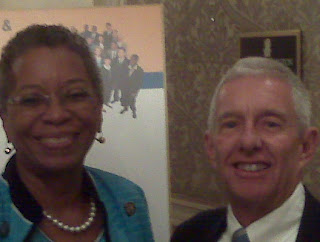 Michael Akin, executive director of Catholic Charities of the Virgin Islands, met with Virgin Islands Delegate to Congress Donna Christian-Christiansen at the 2011 Congressional Black Caucus’ Health Braintrust/National Minority Quality Forum in , on April 12. The delegate is chair of this forum. Mr. Akin was in the nation’s capital for the spring meeting of diocesan directors for Catholic Charities USA (CCUSA). The directors met with their elected representatives to discuss CCUSA’s anti-poverty initiatives, including the National Opportunity and Community Renewal Act, which was proposed by CCUSA.
Posted by Catholic Islander News at 7:26 AM